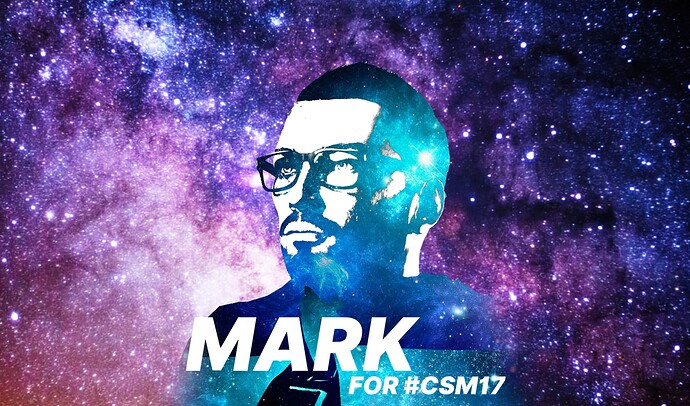 My name is Mark Resurrectus, wormhole CEO of the Holey Roamin’ Empire and Executor of the TURBOFEED OR GLORY Alliance. I previously ran for CSM 16 finishing 12th, and if Suitonia had taken that job at CCP about a month earlier I might have been on CSM 16. But we came very close last year, and I feel as confident as ever about the importance of this process (as misguided as that might sound), so we’re back for Round 2.

What are your areas of expertise?

This hasn’t changed much from last year, but I’m an alliance executor and corporation CEO with extensive experience in small to medium sized group management and organization, specifically with regards to how those groups operate within J-Space. During my time as executor my group has grown from effectively nothing to being a community of many well-intentioned idiots who are at least modestly active all the time, and occasionally much more active (but less modestly). I have established lasting and valuable diplomatic ties with many other groups while still maintaining the good sense to shoot at anyone and everyone who we run into.

I’m far from an expert at every possible game mechanic - but I have a good group of friends, allies, and corpmates who I frequently collaborate with and who help patch any holes in my specific game knowledge. I’ve also been playing EVE off and on since 2006, and have had the rare opportunity to see the game transform over that time. This has granted me what is, I feel, a unique perspective on the game as a whole and the communities of people who inhabit it.

They also wanted me to score my areas of expertise? So here are four that are worth recognizing, I feel.

Corporation Management: 4
Propaganda Development: 5
Timeliness: 2
Number of Bathrobes I Will Bring To Iceland: 4

Ok so why are you running for CSM again?

I’m running for CSM for couple of reasons that are very important to me. However, there is no reason more important as my feeling that my people, the degenerates and malfeasants who have secluded themselves in wormhole space, deserve to not just have a seat at the table, but also a voice with which to address and, if necessary, complain incessantly about decisions being made at that table. Wormhole space is my favorite place to be in all of EVE, and the way it has languished over the last half decade has been devastating - not just to me, but to many others who share that same enjoyment from this playstyle.

Years ago, wormhole space existed in a fairly healthy place. There were many active groups, both large and small, and there was content aplenty for anyone who wanted it. Over time, this playstyle has been slowly eroded into a shell of what it was, thanks in large part to changes made in the From Wormholes With Love and Surgical Strike patches, but also to sweeping changes made elsewhere in the game that have effected the greater EVE playerbase and the game’s economy. These changes have turned large swathes of J-Space into veritable ghost towns, and you can talk to almost any of your wormfriends and they’ll be able to tell you about numerous people who they used to really enjoy playing the game with, and who are no longer playing the game because it’s not fun for them anymore.

These changes, well-intentioned or otherwise, have been a poison to the wormhole ecosystem, any many of them have been planned and negotiated without any input from an actual wormholer. Changes that may have been designed to balance certain parts of the nullsec meta have wrecked shop on long-held and overwhelmingly enjoyed aspects of the wormhole meta. The recently reverted filaments addition was one such change, made years ago with little to no coordination with anyone in wormhole space who would have no doubt quickly pointed out how silly a mechanic would be to allow any ship smaller than a freighter to instantly extricate itself from a region of space that is designed around careful, planned travel and preparation. It took years for that change to be reverted, and that change was not alone.

I’m not expecting to be able to perform miracles here. I recognize that there are things that the developers and community teams have changed that we’re just not going to get back. My goal is to have a first-hand perspective present at the table in order to say “whoa hey do you realize how badly that will ■■■■ all of us” whenever somebody upstairs gets a hankerin’ to do some real ignorant stuff. I have ideas for ways to create new, exciting content drivers for wormhole space and beyond, as well as suggestions made by larger wormbrains than mine about how our space might be rebalanced to entice some of those who have left the game to return, but realistically my #1 priority is to try, with as much sheer will as I have left to muster, to not lose anyone or anything else.

Nice. So what now?

I have built a healthy coalition of groups, mostly wormholers, but others from null and lowsec, who understand the need and share the desire to have this kind of representation on the CSM. If you too share that desire, then consider putting me on your ballot. I’m not asking to be #1 (though that would be especially cash money), but if you have ballot slots left after your alliance selections have been made, consider a token wormholer to fill up the rest of those spots. We were within 200ish votes of making it happen outright last year, and the wormhole vote was split significantly more then than it will be this year. If there was ever a time to do it, both because of the opportunity we have to make this game better and the need to keep it from getting worse, that time is now.

If you have any questions you’d like answered, please leave them below and I will address them as soon as possible. If you would like your question answered privately, I can be reached at both of the following:

Also here is a link to a very regular and normal reddit thread by nobody in particular: https://www.reddit.com/r/Eve/comments/uwqpeu/mark_resurrectus_a_wormholerbtw_for_csm17/?

Without memes or anything like that. I highly endorse Mark as your #1 wormhole candidate.
He has the full support of Foxholers and I hope of my readers from ashyin.space

Vote Mark Resurrectus if you want a wormhole vote with confidence.

Mark is a solid train. Of all the A4s I would rate him as Big Nige in the war department black livery. He definitely pulls troublesome trucks though.

@Mark_Resurrectus why do you have more than two bathrobes?

Wspace needs a comeback and I know Mark remembers what wspace used to look like. Hopefully he can help CCP with some good ideas and revive the best area of eve.

My grandpappy once told me that if you’re going to do something, never half ass it - you have to go whole ass. One day I decided that I was going to own a bathrobe, and my grandpappy’s words rang in my ears: “go whole ass, Mark”.

Damn that should’ve been my campaign slogan. Mark Resurrectus: A Whole-Ass Wormholer

i am mark resurrectus and i approve this endorsement

I’m German Gas Guy and this is my favorite campaign thread in this forum.
For real, with Mark I feel like we have someone that feels responsible if voted in, will stay in touch with the (WH) community and hopefully doesn’t induce the wrath of CCP Monkey Paw on us by telling CCP why the hole closes.

I’ve flown with Mark many a time – he’s a great guy! I fully back him as a fantastic candidate for CSM17 to help represent us wormholers.

Opinion on capital escalations in 5/6s, and ideas to get more people in WHs?

Can you elaborate a little more on the first question? I’ll answer them both together.

Do you think that Capital escalations for 5/6s are in a good spot, in terms of risk vs reward and reward vs EHP? Do you believe that the reward is too low, or presented wrong? Do you think there should be a better incentive to field the old-school dread+fax+subcap groups for ratting?

what’s a point to participate in this clownfest, if CSM has zero impact on devs?

good luck on your campain but why vote for you when we got kenneth felt that has proven his bright ideas with the industry patch is working close by the developers , and his kinda a bro with rattati the multi tool of ccp .i mean give me a reason to vote for you and not kenneth .

How fiercely will you ask for demand a cat earn skin for mining barges?

Will you people please ■■■■■■■ elect Mark so I don’t have to be the wormhole CSM anymore? Kthx.

Vote for Mark. He’s passionate about wormholes and the game, and knows more about spooky WH’s than I. Overall an easy person to talk to with a good mindset for CSM.

WH dudes need to try to look past the corps and just get someone on the CSM who can represent your playstyle, that actually lives and engages with WH things. Mark is your best option, especially since he came close last year to getting on.

Kenneth and I both live in and have experience with wildly different regions of space and playstyles. I wouldn’t campaign as an industry candidate - it’s outside of my wheelhouse. By the same token, he’s not campaigning as a wormholer, either.

If you’ve got room on your ballot for both, put both on. Otherwise, it just depends on what matters to you more.