Thanks CCP for such unfair game

So CCP just needs to slap a statement on their promo videos that basically says “This is EVE. You’re probably going to die multiple times and quit. And we’re OK with that.”

And go out of business six months later.

You can’t just place a disclaimer like that on what most of the market perceives to be a cooperative PvE spaceship role-playing game. The fundamental nature of EVE’s marketing needs to be changed so that it becomes visible to a specific demographic of players, just like hardcore PvP survival games are, for example, while at the same time being palatable enough for regular people to try who might not be into the hardcore survival experience yet, but potentially could be in the future after they develop a taste for it (i.e. a demographic’s natural replenishment). 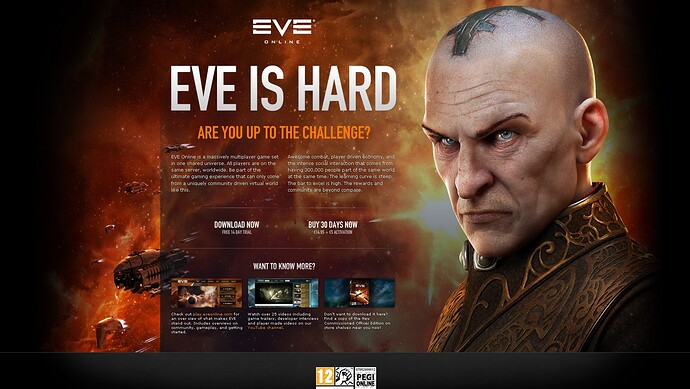 I know. This is what it should be still is my point. It attracted the right people those on who this game can be built upon not whiners who want to change it to EVE Echoes and farmville.

It may be from 15 years ago, but nothing has changed. It’s still the same EVE, though they have dumbed it down a bit since then.

The problem is that the current generation of gamers want EVE to be a no-risk, minimal effort, Candy Crush space sim, which EVE has never been and never will be…

It might be the same EVE, but the gaming market has changed significantly. Gaming’s gone mainstream, and is now full of casual players who own computers, but are used to playing freemium pay-to-win clickers on their cellphones. Incorrectly marketing EVE will draw these people to the game (which once again might actually be the intent) and cause a lot of friction, because they aren’t here to lose their god-damn spaceships, but to see the number on top of their screen go up.

Indeed, CCP misrepresenting EVE (intentionally or not, I will be realistic and say it is deliberate) they attract the wrong people who rightfully get upset when the game is not what it was advertised to be.

Either change the game (hopefully not but the signs are there since some time to slowly shift) or be honest. If they were honest maybe the numbers would be lower but more would stay as they get what they sign up for and probably would end in more loyal customers.

Back on the topic of Citadels, it would be nice if CCP would revert the anchoring system back to where it was years ago, when you needed to have high faction standings in order to place a POS tower in high sec. That would get rid of much of the Citadel spam. But then new players would whine about having to get and maintain faction standings.

They already doubled the cost of structures to price “new” players out.

Indeed. Compression was the only thing I was using my structure for. I’ve done the same and just gone with compression on the Porpoise and Orca.

Now, give me a YardShip to build with and Ill never dock again

I do miss the old days of being able to off-grid boost in my Orca inside of my POS shield. Good times…

big corp and let them be only one who are controlling the game?

CCP didn’t do this. CCP merely created a sandbox. Players made the environment. It is players who figured out that if they form one big corp then there will be no or at least very little chance of losing. Which is natural as if you can lose and loss hurts then players will do anything that they can to avoid losing. And they often do it even in games where you don’t lose anything and where the loss is insignificant. Often just the fact that you didn’t win even if there is no benefit causes players to do this.

It is human nature. And you should have realized this from the very start that you won’t achieve anything in EVE yourself or with small group of friends. Eventually someone bigger comes and take away everything from you just because he can.

And if you weren’t up for this, you should have quit and play another game.

One of my eve friends has health issues and took a break a few months ago. He contracted his items to be (as you know you may not guess how the CCP will trick players and may cause their items lost like Citadel change or Niarja and other systems cut-offs) on the safe site and give me the rights to fuel
his station.

He logged a week ago and mentioned his status is still not clear and may not come back. I told him to hang in there and asked him to give his station’s control fully to me because keeping it in space costing fuel and i could pull it from space and store it safely until he come back.

So, i setup a corp and transferred his athanor to me. Then guess what, my new corp war decked by 3 big corps without giving me a chance to pull that station from space.

Now, i am asking those questions to CCP?
-why do you hate so much from casuals?
-This char has no visibility in game, station is not on main routes and no one has access to it. It is not even visible to anyone in system. Why do you snitch me to big corp and let them be only one who are controlling the game?
-How do you expect casuals to try new things or try other stuff in game while they can’t do it?
-Is this fair to newly established corp to war decked 3 big corps? how do you think that they can protect their selves? 1 new vs 3 big is fair for you?
-Isn’t such actions will end up that eve will have bunch of big players who doesn’t allow people to grow and rule the game? Isn’t that why the people quitting right now?
Can’t you see how many people quit the game after getting ganked and bashed by big corps?

Station will be destroyed in a couple of hours. I will cover my friend’s loss. But this is a big bull****. I should be able to deploy station and operate it. Finding it Dscan and using probes are ok.
But snitching somehow (it could be related with game design but you are the ones who are designing it) is

I don’t know what to say.

While I regret your loss, doublecheck in the future what you sign up for, and don’t make promises you can’t defend.

Then why it sometimes feels like CCP vs Players?

I think they would gladly milk us why we fight with each other instead of fighting for better game. Thats what you can see commonly around the world right now. Its how it was always conducted. Antagonize and then you can rule them with ease. While united society is difficult to please, is a lot more powerfull and influential, to the point of endangering the status quo that profits only the ruling class.

Yea the changes to war decree and structures was another donkey punch to the balls that made me stop playing. It fuels the delusional shetbird subculture of losers who shoot structures in high sec as real pvpers or cool. They then added expensive loot cores and lowered the hps on structures to the point 5 battle ships can bash a structure in 30 mins or less. The reality is ccp are morons who allowed structures to be placed anywhere to fix their dumb choice. CCP are making structures easy loot filled targets for dimwitted pvpers in high sec who can brag they are elite pvp shetbirds with big kill mails…

It fuels the delusional shetbird subculture of losers who shoot structures in high sec as real pvpers or cool.

Damn. And there I thought that I can be real PvPer when I stop ganking and join RIOT and bash structures. I was wrong. Also fake PvP.

Anyone knows what that elusive real PvP looks like?

So basically the usual numbers. A few people per month get something valuable wrecked and ■■■■■ about it in forum, dozens of “real EVE” players jump on them to tell them to HTFU and GTFO.

But of course somehow these “hordes of screaming carebears force CCP to compromise their vision” and it’s their fault the game has reached the depths it has.

Hey @Shipwreck_Jones, do you think maybe it’s time for another mega thread posted on the evils of these nerf-bringing, game-wrecking, perma-greens?

Because, you know…
The hordes.
And the screaming.
And the forcing of CCP and stuff.

To get back on-topic, I’d like to ask the OP:

I should be able to deploy station and operate it.

Why should a single player be able to deploy a large asset in space and operate it?

It’s hard to figure out what your actual complaint is from your OP, but it seems you think stations should not show up on Overview and that having them there is “snitching”? How would people use station services if they had to Dscan and probe and bookmark them all?

I’m fuzzy on the mechanics of station transfer, but I would assume you either didn’t unanchor it immediately, or you told some people what you were doing, or your friend did. It seems unlikely that 3 corps wardecced you the moment it transferred (unless they had advance warning).

At any rate, you lost a station, you can afford it, live and learn. Calling for all stations to be hidden from overview seems a bit of a stretch.