Any chance you can give the porp another high slot then, it’s currently very limited choices wise if you triple mining boost fit it.

Compression should be a hull bonus with core active, not a mod

As the changes are live on singularity and you can check them out and my suspicion that “capital compression modules” would have insane fitting requirements (see image below) were proven right. 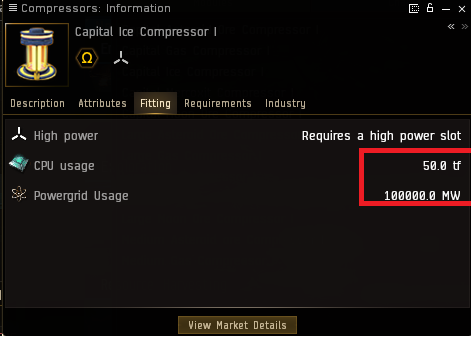 I ask one question: Why? How are you supposed to fit this on a rorqual? You not only have to give up a highslot but also tank if you want to use it?

I’m trying the Large Asteroid Ore Compressor I, I believe that either it’s Powergrid usage should be reduced or Orca’s available PG increased, I had to offline a Burst to fit it

Modules are now on Sisi (after restart a few mins ago) but no modules on the market (only T1 available anyways) and no blue prints to build them on the market.

The point of the Porpoise is that it can go through small wormholes and harvest ice in shattered holes.

Pretty sure that with the porpoise being introduced as a booster when it was first added, the point of the Porpoise is, in fact, to be a booster. You want to make the case that it’s garbage for gas because it’s got no slots the gas harvesters can fit into, won’t argue that, but trying to claim the purpose of the Porpoise (and I do commend you for avoiding ‘The Porpoise’s purpose’, even as I indulge in it twice) is anything else is just silly.

Why add a module for compression why not make it in hull as in the rorqual but with the need for the core to be active.

To a) use the existing command burst mechanics, and b) add the skill requirement. If it’s on the rorq, then anyone who can fly the rorq can still fly the rorq and use that ability without training any new skills. Adding skills means removing a small amount of ISK.

Rorqs are used in the safest places in the game

Because the residents of those places work to make them safe. Feel free to put in the work to make your mining fields safe.

I am talking about the generated solo by the command ship pilot.

Then don’t use it solo. It’s not meant to be used solo. If you’re mining with a bunch of other people and making no money because you’re there in the service ship (Boosts and compression) making their lives easier and more profitable, get them to pay you for it.

Why don’t combat ships get more dps “to make it easier”?

Because Muninns exist and are the right answer to basically everything, and still will be. So DPS is already on easy mode.

It is not in any patch notes. I would not believe anything CCP says since they lied about scarcity being over in Nov.

Well, then since the resist increases are in a devblog, and this isn’t in patch notes yet, either, you have nothing to complain about, because you don’t believe any of this, do you?

But still head of Q2 and literally any quarter of 2021. Honestly, a 2% quarterly drop when the YoY is still up? Not an issue.

Like ‘people can shoot you while you do it’? I mean, there is that one.

Dude, just use jetcans. you know what a jetcan and the fleet hangar have in common?

both can be accessed as an item hangar by both the porp and barge.
both require the barge and porp to be within 2.5(?)k of each other.

you know what they don’t have in common?

jetcans are way bigger.
jetcans don’t require the barges to reopen them each time the porp warps off grid to dropoff at station.

sit your barges on a jetcan and dump into it the same way you do the fleet hangar. if you want the barges to follow the porp around grid, anchor them on the jetcan and use a tractor.

so, about the new skills we will need. i hope you decide to make them available in places other than ORE space.

putting a indy core and a compression module will not saturate your grid but it will take either 1 shield and one foreman boost or 2 mining foreman boosts. So you cannot boost / rep and compress in the same time. You must chose.

and yes, the fitting requirements are a joke right?

its all part of the long standing trend to screw over rorqual pilots going back to when they put them on grid and turned them into mining platforms. here, buy these very expensive drones and train them so we can nerf them to uselessness. oooh indy core to improve boosts and help the drones that now suck. now buy new mods and reduce tank options to go back to being a fleet support ship. thanks for your investment and skill training, jokes on you again

Then don’t use it solo. It’s not meant to be used solo.

If i am in a fleet boosting my friends. They get the boosts and i keep the ore I mine. That is 2-3M isk per hour for fielding a 1.8B isk ship. The risk vs reward is garbage and needs to be fixed.

because you don’t believe any of this, do you?

I believe that CCP is liars and has been proven liars. So no I would not believe it any ways. Once something goes live that is another thing.

Just be honest and say there is a minimum of 5% loss on gas decompression. This word sandwich to try to state otherwise is worse marketing than just being upfront about it.

I think overall the Gas decompression thing is silly, not sure if you know this but gas actually compresses pretty easy, you just put it in a tank and apply pressure. Having a bunch of skills to learn how to decompress the gas just feels like an excuse to shove a bunch of skills into the game for the sake of it when logically how does it need decompressed more than the ore does, or how does ore even get compressed in the first place, its a solid already, it can’t get anymore solid man.

Like we can’t complain too much because its not already a feature in the game so its not like you’re taking something away, but its parallel existence with the existing mechanics in the game is nonsensical.

If i am in a fleet boosting my friends. They get the boosts and i keep the ore I mine. That is 2-3M isk per hour for fielding a 1.8B isk ship. The risk vs reward is garbage and needs to be fixed.

Sounds like you’re getting the shaft, and up until now have been OK with it. So fix it and ask your friends to split the extra ore they mine due to the boost % diff? Or pay you your fair share. There’s a million ways to address this between you and your friends without complaining about your existing bad deal on the forums.

I mean, I can complain to the devs that I’m not getting a gazillion ISK/hr for [insert justification], but at the end of the day I have to deal with the reality of what the game is.

or how does ore even get compressed in the first place, its a solid already, it can’t get anymore solid man.

So is a piece of paper, both before & after you crumple it up.

But still head of Q2 and literally any quarter of 2021.

The reason Q4 works ok is because CCP sent out that email that lied about scarcity being over. I am can not wait to see Q1 2022.

With these changes we are another step along the plan to retire Player Owned Starbases, by disabling the POS Compression Array. This item will no longer provide any compression function. The few instances remaining in space can be unanchored and reprocessed back into base materials.

I use POS all the time in low sec for the anoms. Am I expected to now put up Athanors or other “types” of stations in all the low sec system in my local area to be able to have a place to safe up or are people like me just SOL ? POS literally served this niche role perfectly, its a shame to see CCP are such a hardcore mission to get rid of one of the BEST asset systems this game has ever had.

If i am in a fleet boosting my friends. They get the boosts and i keep the ore I mine.

So no I would not believe it any ways.

Then rejoice! There’s nothing to complain about, because you don’t believe in the things you’re complaining about! Complain when they’re live and you believe in them.

I think overall the Gas decompression thing is silly

Dude, I’ll explain this one to you on Jabber, so you can appreciate gas decompression properly.