Dev blog: Changes Coming To The New Eden Store With The March Release

It’s been on several people’s radar. Especially the monetization folks but they have very little control of in-game stuff like this. I might be able to get ball rolling on this. Thursday sync up with the store manager is going to be packed: SKIN Collection Page, FAX bundle, everything else I have for them…

So do those monetization folks or nes manager listen to forum feedback? Or who do we have to summon to share thoughts. I posted in little things, but there are so many suggestions and only one @CCP_karkur . Is there anybody to help monetizatipn folks do monetization right?

On some level, I don’t even think it matters if we have a snowball’s chance in hell of preventing this idiocy. We couldn’t prevent the utter idiocy that is Aegis sov, either, but we put our objections on record. That’s basically what I’m doing now. Personally, I have to wonder how much of this is a result of a shift in direction made while @ccp_seagull was on leave and we had an EA guy running EVE. (Note: Seagull’s more than welcome to her leave time, she’s earned it. But EA’s managed to royally screw up Star Wars, for crying out loud. It’s a property most of us thought you could only screw up as bad as EA did on BFII if your name was Lucas.)

Wow, thank you for sharing these character designs! Wait, my character sucks so bad compared to some of them. Thanks a lot…depressed now. Where’s my resculpting certificate, darn it!

Thanks to Carneros, I heard the “why” of the store change but still not thrilled about it.

Was that on TiS? I might have to go check the VoD.

Yeah… I’ve been making my objections known for years.
Just gets tiring after a while. I’m not trying to stop you, it’s more exasperation from me at this point. It’s why I post less here anyway cause I don’t even like this forum layout.

The starwars thing is an entirely other issue but yeah, ea is terrible and I knew bf2 would be a joke after bf 1 came out and they didn’t even have the space battles from way back on the old battlefront where you had the two opposing ships and you tried to take over the enemy ship.
Off topic and all that but cmon it’s ea. No one should ever expect them to do things right. They ruined deadspace too.

It boggles my mind that anyone in CCP would remotely think it’s a good idea to hire anyone from ea when ea is the most hated company for a reason.
No one from ea has any business in the gaming community anymore.
Id bet money all this stuff is directly coming down from the ea ppl and it shows that there’s an issue with decision making and leadership within CCP.

I wouldn’t be surprised if sometime later this year they introduce lootboxes. It’d almost be funny if it wouldn’t be so sad.

I didn’t make any of those pics.
Just Google something like sci-fi clothing concept art. I picked a few I liked personally that I think fit the dark sleek style Eve used to go for before it became palette swaps and t-shirts/trucker caps. You’re bound to find all sorts of cool pictures you will like.

As for character customization I’ve always tried starting with randomize till I find something interesting. I spend alot of time on character customization in games because I don’t want to look like a default character. Im rather proud of my avatar cause I think it’s a good departure from what stock amarrians usually look like. Bald and miserly.
But I cheated and use ni kunni actually, I couldn’t get the beard/jaw line I wanted with true amarr and I had to sacrifice that or a narrow nose. I chose the nose. I consider him true amrr though just wish I didn’t have the bulbous nose

Well, gotta agree with the majority here, the Dev’s that are making this change are just flat out plain stupid.

Instead of retiring those items from the store forever, they could just as easily put them into rotation. That way both old and new players will always have an opportunity to buy those items.

There’s been some very good alternate suggestions posted by the community in this thread, CCP seriously needs to pull their heads out and start listening.

So the first batch of sales started.

Now, how do I tell from NES window if I have a skin or not? WTF CCP?

I guess CCP is in need of some more cash…

I think you’re right. They desperately need cash to keep the boat afloat for just a little longer. 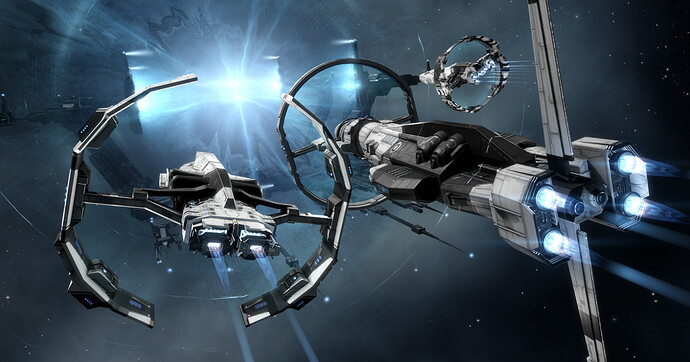 Check out this news item for the latest information on a new line of SKINs for Sisters of EVE hulls, as well as details on SKINs that will be retired from the New Eden Store on March 13th!

That’s 75 SKINS if you didn’t buy any earlier. Say, I want to buy them all, I did not buy any of them earlier and I want them all now. @CCP_Falcon what’s Your best way to go about it?

Do You open the news with the list, open NES window, open market-SKINs window, open Character sheet-Skins window, which one is your personal favorite? Do You then start picking one by one from the list from the news? Or what? Did you guys try actually buying SKINS in bulk, say 50 or 75 at once? Then activating them all one by one? Feel comfortable? Convenient menus? One click buys? How do you tell if you have a SKIN already from NES window?

@CCP_karkur Do those make sense? Or am I just being too picky?

Suggestion 1: ‘Character sheet -> SKINs’ should list skins not ships under categories, so you could right click and buy, fore example, or at least view skin’s info tab, not ship’s. [48] Suggestion 2: Add a button to ‘Character sheet -> SKINs’ to toggle between skin collections/market ship tree view. For collection to match market hierarchical view, so it is easier to buy what you’re missing. [18] Suggestion 3: Little green checks when a category is complete. In both skin set view and ship ty…

Who else could I summon or send suggestions to? Don’t have to be too bright to come up to those really. Plain QoL little changes. And its straight monetization stuff, one could think those be top priority fixes too.

Since we’re at the skins department. Can I ask fo a Cold Iron everything skin? Deep, dark, flat black is where my money is

Looks like the skins department has got some more energy to it. Not sure whether I like it yet but looking at Dramiel’s Sariel’s Flames on SiSi, it’s certainly stands out.

@CCP_Falcon @CCP_karkur So I went and bought all Ardishapur (8/8) and Kopis Edge (23/61) SKINS which are on sale now. Ardishapur was easy, only 8 of them, I didn’t have any, just buy them one by one. Kopis Edge… you noticed how I marked 23/61 are on sale? In NES window you can see which of them exactly are on sale. In Character sheet-SKINs you can check if you have activated SKINs you don’t need to buy. Such convenience, much life quality. WHy does it have to be so hard? Its monetization FFS. 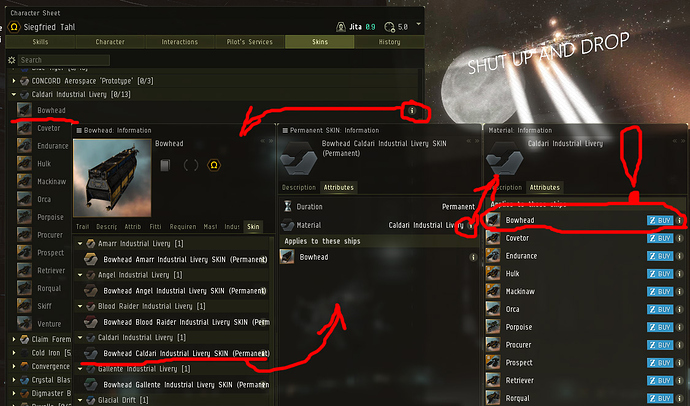 Now, why is it not what you see in character skins tab? 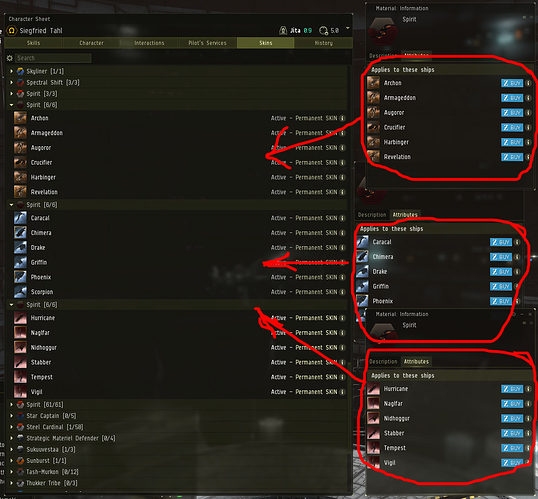 Wouldn’t it be awesome if you could see if you got a skin active, and could buy in one click all at the same place? And see if sale is on too. 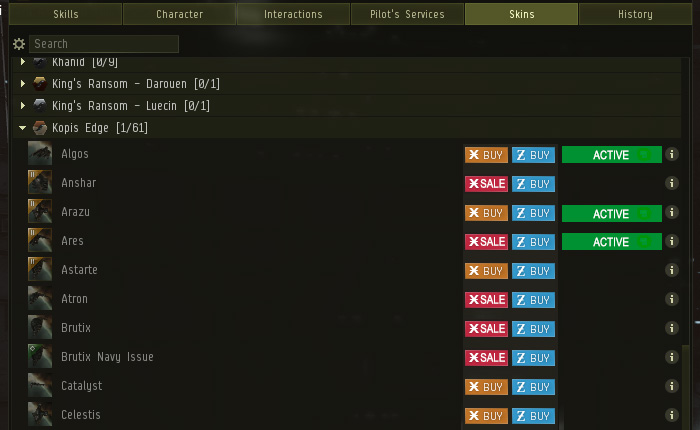 I’d like to recommend that SKINs that are retired from the New Eden Store be moved in game to the appropriate Loyalty Point Store, at least for some time. While these SKINs may no longer generate much in real money sales, they may still generate in-game sales for loyalty points.

CCP does need to rework its NES store a bit - as some have suggested, reorganise the skins for each hull, and then select the one you want, rather than have 100 million options on the frontpage.

Also, release some of the clothes in the client!: 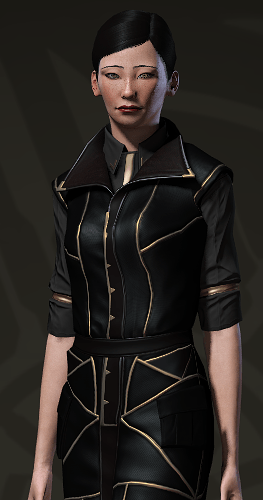 Of all the things that Arline is wearing in the picture, only her shirt and her left eye are actually available. and that picture is a good 2-3 years old now.

ok folks, everything is about $$$. This is an experiment to see if they can wring more krona from virtual items like any other game now. If it doesnt work, they’ll change it back. End.

LEL. That dress was first seen on Singularity in 2011, pre-Crucible: 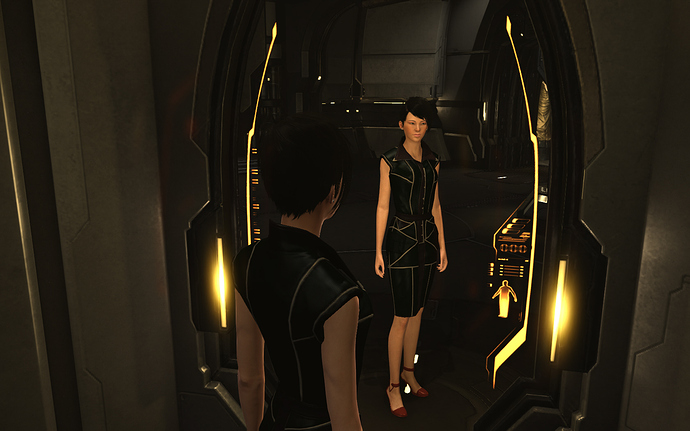 Would be ridiculous if this wasn’t !!CCP!! at work.

I totally understand the desire (need) to change up the NES store, and it does make sense to create a rotation of available items and SKINS as a way to generate interest and sales. Addressing the NES and making it easily navigated should certainly be a priority, especially since that is a main avenue for revenue.

However, when one usually looks at something and says “this [space] is cluttered,” the common response is not “let’s throw out a bunch of stuff” but “let’s organize it better.” Deleting items from the store permanently doesn’t encourage people to buy them any more than putting them on rotation - especially considering, later players who might have an interest in those items (read: spend real money) will never have that opportunity. That is literal money wasted.

Personal opinion: Organizing the NES site (including the creation of availability rotations) should be the priority, not deleting content.

Side note: I actually enjoyed walking around the captain quarters, I thought it added to the immersion. I was kind of sad to see it go.

So was I, but remember, at that point, it was orphan code. They even said when they pulled it by then, it was actually an impediment to any future ambulation attempt.

LEL. That dress was first seen on Singularity in 2011, pre-Crucible:

Would be ridiculous if this wasn’t !!CCP!! at work.

And why would players buy dresses ? we don’t have “walking in stations” option anymore so all of the apparel is totally useless.