I was planning on making a much elaborate report, but with the recent conquest of the 27th system and the release of a new communication by the collective I feel like it’s not the time for good wording and have decided to release my report on the Transmuter now. 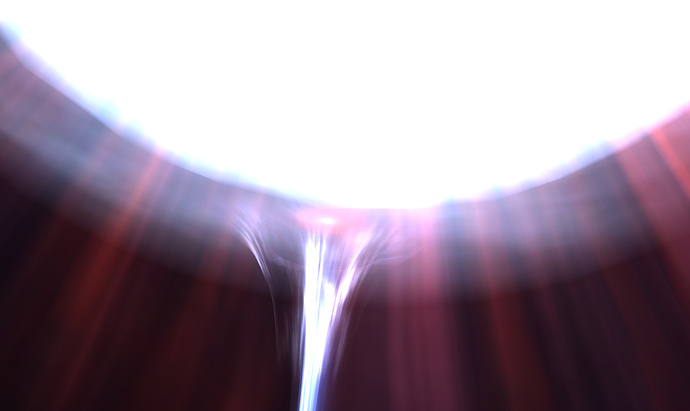 The transmuter beam is made of two major parts visible to the eye and also distinguishable by spectrum analysis.

Based on the same principle used in the disintegrator, the entropic beam uses entropic force to penetrate the outer layers of the sun and reach its core.

Once reached, it uses it’s gravitational tidal forces to alter the space time continuum and create conditions allowing the formations of elements normally not able to be formed, or increase the production of rare elements (like isogen 5) and then extract them through a localized conduit.

By doing what is basically a controlled fusion of heavy elements, the sun starts emitting much more radiation than usual (even by blue stars standards). Which leads us to the second part of the beam.

As we can see on the last image, the plasma flow actually take it’s source in the upper layer of the sun. From the data we gathered, It seem that the initial use of the entropic beam is to use it’s tidal force to create a “current” in the flow of radiations emanating from the sun that act as a maelström (or a kitchen sink to put it extremely simply).

The flow starts at the “impact” zone, and then spread across the upper layer of the sun until the current catch most of the radiations and redirect it toward the transmuter as a plasma flow.

This flow is then gathered by the lattice, condensed. and then harvested.

This process would allow the transmuter to get most of its needed energy directly from the sun, while stabilizing the sun’s increased radiations, thus avoiding all life being wiped from the system.

The transmuter serves many purposes.

Basically, a doomsday-sized entropic generator, able to generate a constant flow of entropic force. This basically means that the sun and solar system is pushed further away from a state of gravitational equilibrium. There is virtually no difference with a “disintegrator”. The resulting radiations and tidal forces requires the transmuter to be protected with heavy armor.

Part harvester, part shield generator, the lattice is used to gather most of the residual plasma flow that reaches the transmuter. The energy gathered allows the structure to generate a virtually impenetrable shield against the extreme radiation.

The last part of the Structure is to create, stabilize, store, and deliver singularities. The exact Process is still unknown.

I would like to remind you that the theory presented so far builds largely on hypothesises. While we considered empirical data whenever possible, many of our established data gathering methods have been incapable of precise measurement or suffered too few numbers of observations.

Most notably the transmuter seems to serve only two purposes, which is very odd given the rest of the triglavian culture. It’s probable that the transmutter serve a third goal, even more obscure in it’s working.

The following part can (and should) be taken as purely speculative.

The following part tries to establish a link between the observed transmuter properties with my established theory on gravitational forces in Anoikis and New Eden.

If my theory of mass-energy ratio (MER) is correct, which seems to be validated by the latest scope video [LINK to video, skip the researcher name].

The base idea is that conduits and wormholes follow the same rules and principles while differing deeply in means.

In my theory WHs use a MER > 0.5, letting points of gravitational harmony resonate and thus, connect.

Of course, the more the points are in harmony, the further (and more stable) the connection can be.

This is used every day by the stargates network which opens WH connections between two set harmony points.

The release of large energy in the cluster during the seylin incident allowed the existence of stable WH connection between anoiklis and New eden.

Again, If my theory is correct, the abyss would be the opposite: using a MER < 0.5, it use gravitation and tidal force to move items faster than light speed.

Again, one application used everyday is the acceleration gate. Used to access deadspace pockets, they allow a ship to reach points of gravitational anomaly that warp drive (that use MER >0.5) can’t reach.

The last part of the transmuter becomes clear: to alter the MER of the system to allow connections with deeper parts of the abyss.

To take an analogy, look at how wormholes are formed.

From Empire space, the C5-C6 systems can’t be reached, because the local MER isn’t high enough to allow stable connection between points.

But if the average MER was to be raised, such connection would be possible.

By deploying transmuters in new eden, this MER has been moving.

And in conquered systems the effects are even more visible

Based on observation and established theory we suggest the following effects closely related to the transmuter activity in final liminality systems:

I would like to thank a lot of people that allowed me to be able to conduct such analysis.

Mr Degtyaryov for his data gathering and analysis on the transmuter.

Mr Kaugan for his valued input, opinions and remarks that helped the project evolve.

Mr Sentinel for it’s spectral analyser which helped me time and time again.

Miss Raske for her patience with me and heated debates.

Miss Valentine for her work on the beam

ARC’s organization as a whole, for opening up their server to the public and helping conduct the projects.

It goes without saying that if you have an opinion on the subject, feel free to comment, I’m publishing it here precisely for confronting my theories.

For the Gravitational study of raravoss

For the spectral analyser of @Veskin_Sentinel

For the large scale gravitational study and the results, even if inconclusive it yield important data

For the Organization effort by ARC

To dive a bit further on the edge of “what could happen”
Here are some of my speculations:

Scenario 1 : the systems’ MER will drop low enough to be considered as “deadspace” as a whole.

In this scenario, the stellar manipulation of the systems will pretty much stay where they are today, only allowing connection to deeper parts of the abyss, reinforcing the effects already in places.

Scenario 3 : the trigliavian return to the abyss.

It’s a possibility, even if unlikely, that the collective will have got what they want and goes back to complete isolation as it was before.the systems would then return to their natural state over the course of time.

At the scale of the cluster, we could see some major changes:

-Drop in the average Wh connection per system

-Change in the composition of the ore available in new eden

-Some stargates could stop working.

-Possible emergence of a secondary network of “gates’”

-Decreased radiation emission of most stars

I do not believe we’ll lose connectivity via wormholes any time soon to these systems. What I do believe, is we’ll see a new type of wormhole form. Anoikis works in mysterious ways, and just like we didn’t have connections to Thera, shattered, and Drifter wormholes prior doesn’t mean we’ll lack them if these systems change drastically.

In addition, unless these harvesters are pulling from the core of the stars, I do not think these stars will go supernova. If they are harvesting from the exterior layers, then those layers will eventually get blown away, as they will eventually lack the gravity to counteract the forces emitted from the fusion in the core.

Regarding the supernova risk, it’s precisely because the beam reach the core of the star to do it’s work that I included this risk category.

I do not take pleasure in throwing such warnings.

For the WH connection question:
I did not said that we would lose ALL connection to these systems through WH, just that they (if my theory is correct mind you) will become rarer depending on how much the MER of the system change.

And for having spend many years studying the WH formation in Anoikis, even if it’s not yet fully understood, it’s far less mysterious than it was at the start. I would like to remind you that all WH connection you spoke off appeared after the Caroline’s stars events.
(except the drifter ones that are mechanically generated, like our stargates)
Which correspond to a release of large amount of energy, effectively raising the MER of the cluster, in the MER theory, thus allowing new type of connection.