@Lugh_Crow-Slave once commented that bad ideas tend to get a lot more attention than better ones. I think he’s right. Not only do people like to argue about bad ideas, but this causes them to show up in the unread section, which further increases activity. 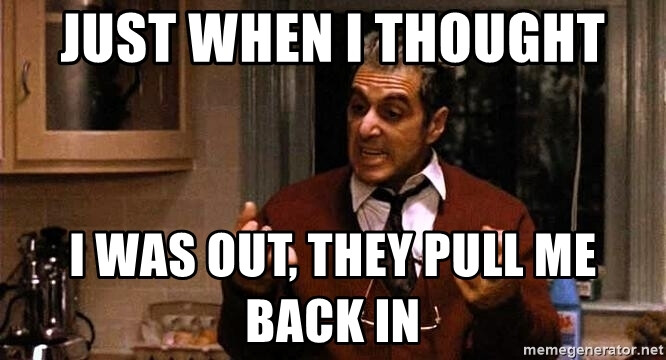 So, I wanted to give some attention to some ideas that I actually think have some merit. Naturally, I don’t expect everyone to love them -that’s not the point. In fact, I’m not even 100% on board with all of them. However, I do think that they are worthy of consideration, and that they certainly deserve more attention than the brain turds that we all like to dog pile on. Plus, what would you rather do -rehash the same old arguments on the same old topics, or argue about something different for a while?

Let’s pretend CCP put out a poll and promised to do whatever got the most votes. What would you vote for?

Needless to say, I probably left off a lot of good ideas. But I’m not going to spend the next 3 days browsing old threads from player features and ideas. So, if you think something deserves further consideration, feel free to add it down below.

Mods definitely don’t need to be restricted inside plexes and the only balance I would change is to rate Trig ships as T2 and T2 trig ships as T3. so no trigs in novice and nothing bigger than T2 trig frigs inside meds.

These are the GOOD ideas?

no, just the ones that don’t completely suck.

What about my idea, to add the numerical readout of the capacitor level to the HUD when the shield/armor/hull readouts are turned on? I think there are probably hundreds of ideas that don’t completely suck.

They don’t completely suck? In what kind of reality are you or Shipwreck living?

One where I can scram friendly logistics and not get kicked out of militia for my trouble.

The armor rig one also isn’t terrible, but I think the penalty to agi would be so high in order for it to stay balanced people might regret wishing for it.

This was another idea that got some positivity before disappearing into obscurity.

Being able to drop things off into structures you don’t have access to then using asset safety has allowed for more of this style of mining. Stealing ore from moons but it’s jank and messy. I still think there would be a place for this. If not an ore blockade runner then maybe a cov op T2 porpoise.

That FW scram thing is impossible to balance and extremely prone to abuse. Terrible idea. Would be easier to just have a new module like an FW tackler.

As for the armor rigs, you said it yourself.

Increased salvage for caps? To devalue the already depressed salvage market even more, which has not even recovered fully from the Trig Invasion phase? Terrible

Gas mining drones? Not only is this laughable, but it would also make ships like the Gnosis even more powerful than it already is and should be in the first place. Terrible.

Player skins are something that will eventually come and be hilarious. Pink dick pics everywhere because CCP can’t keep up with the commissions checking (they could not even keep dicks out of their Eros Blossom skins). A necessary thing, sure, but still terrible.

An even more restrictive FW plex than novice? Shouldn’t they just remove those pirate and navy ships from smalls instead?

The Ore BLOPs Hauler thing sounds interesting indeed, but it’s not in the Poll list, so it might actually be a good idea.

Other games, such as warframe, already have profit sharing for player created skins. I’m not up on all the details, but I do know that it can be done, and that it can be successful.

I think there are good arguments against instanced content. However, the abyss is here to stay. And, I think it’s a mistake to argue that because something should have never been done, that means that we shouldn’t do anything to improve it. It’s like the guys who are opposed to CSM reform because they think it should be disbanded instead.

The salvage wouldn’t be regular salvage, but of the new components that are now required to build caps. I know I didn’t specify, but it’s discussed in the linked post if you care to know more. Anyway, I think that there would be a lot to consider (i.e. impact on industrialists and resource harvesters, impact on cap prices, and possible snowballing effect for victors) around this one, but it would have the potential to revitalize salvaging and encourage additional fighting.

What do you have against gas mining drones?

And yeah, I think there are definitely different ways to address FW. What I do know, however, is that things can and should be improved.

That FW scram thing is impossible to balance and extremely prone to abuse. Terrible idea. Would be easier to just have a new module like an FW tackler.

What do you have against gas mining drones?

You must first justify that the current m3/s needs a buff for gas mining. If you can’t do that then you have to nerf the gas harvesters to make up for the added yield from the drones, requiring you to use drones to get the same yield you do now.

I referred to this:

One where I can scram friendly logistics and not get kicked out of militia for my trouble.

I could just come in and tackle you without repercussions, while I definitely don’t have your safety from an MJFG in mind.

I could just come in and tackle you without repercussions, while I definitely don’t have your safety from an MJFG in mind.

And that would be the fault of whatever FC let an awoxer into fleet. I’m not seeing how that’s open to abuse. Just don’t fleet up with FF legal and people you don’t trust.

Remember the idea isn’t friendly fire is legal in fleets but that fleets can choose to allow it to be.

I saw this coming the moment I opened this thread, biggest arguments ever incoming…

Let’s pretend CCP put out a poll and promised to do whatever got the most votes.

Then we also should pretend to know fully well beforehand that CCP will not listen to feedback and will implement whatever they chosen already or even something not even on the poll and will do so in the most buggy way possible and if they put it on the test server they will ignore all the feedback and deploy to TQ anyway.

With regards to FW plexes, i want pirate ships taken out of novices. They are closer to T2 in power and it gives non-faction frigs some room to breathe.

I might even take all faction frigs out of novices to make non-faction frigs the norm and give noobs a real boost for small gang/solo.

Friendly fire for fleets deserves a shout out. DBS for highsec would be hilarious.

Honestly other than the worm faction frigs aren’t all that oppressive in novices.

Honestly other than the worm faction frigs aren’t all that oppressive in novices.

I did some digging a little while back: